All the Way Round the World…

All the Way Round the World

Delsante Corporation told me I could take it or leave it. Can you believe that?

My family owned this farm for ninety-two years before I had to go and sell a majority stake to a local distributor. Well, Delsante is way up his ass so you know they’re now up mine.

But I tell you what: if I make it out of this alive, I am sure going to enjoy watching those corporate bastards take a red-hot one in the ass. Same for the USDA.

We had no choice. They told us to plant the G646-DSGMO-666 or we could forget about distribution of any of our corn. Well, if we can’t sell anything, we may as well just give the farm to Delsante and be done with it. They’ll hire some Mexicans to come up here and plant that shit for them and they’ll never even remember my name.

So we planted it, watered it, and did fuck-all that their scientists told us to do. I have never in my life seen corn get so big so fast. After a month, I could disappear into those fields. And I’m six-three.

The USDA inspector came out one day along with a fella from Delsante. They were so impressed with how things were coming along. They took some cuttings away in a small plastic bag. Never said a word to me what they were for.

Well, along about eighty days into the growing cycle we started seeing a rust-colored pus oozing out of that corn. I told everyone to stay out of the fields and not touch anything. We walked the perimeter. That stuff just dripped down the ears.  I got on the horn to the local distributor rep and I guess he called Delsante because they came out to the farm with a huge RV that had a lab right inside of it.

They set up spotlights on the cornfield and kept them going all night long. They said it was just a precaution. Precaution for what? I remember thinking at the time.

There were lots of guys in lab coats and SWAT uniforms. Nobody told us any details about the pus, but I could tell they hadn’t expected it, and they were running around like their heads were on fire and their asses were catchin’.

Then one day, I was over in the barn replacing a fuel filter on one of the combines when I hear somebody start screaming. I thought one of the lab guys had stepped in horseshit again. I looked out the window and saw a huge red dust cloud swirling around. All the lab guys and the SWATs were gasping and choking, falling to the ground. I could see they were dying. All of them.

Not thinking, I just ran for the combine and closed myself inside the cab. The wind blew that red dust right into the barn and it covered everything. I can’t see anything through the cab windows now. And there’s no water in here.

So, I’m hoping Delsante Corporation sends somebody out soon to find out what happened to their scientists and soldiers. I saw them die; at least I think I did.  But now I hear things shuffling around the barn and grunting. And one time, something tried to open the cab door, which I now keep locked. I don’t even want to think about what that thing was.

Far as I can tell, anyone coming near this farm will meet the same fate as those things stumbling around my barn. The chemistry folks at Delsante sure did a bang up job. The only thing I know about chemistry is H-2-0 is water and K-9-P comes out the ass end of a dog. But, I’m a farmer and I know pollen when I see it. That red pus dries and blows off. I think Delsante Corporation has a little problem with their fucked up corn.

G646-DSGMO-666 was engineered to survive. I think of all that pollen on the wind.

You can’t stop the wind. It goes all the way round the world.

Now I want to be explicit and state that this is a work of  FICTION and any resemblance to actual corporations and/or actual persons living or dead is entirely coincidental.  Go here for the real horror story… 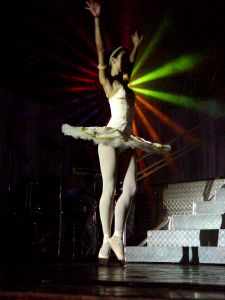 Tran will not let me touch her anymore. Not like a wife should.

And who could blame her? My academic career is of no use to us here. It’s just dirt, smoke, and hunger now. I am no good at chopping wood or creating a shelter from rubbish. It is obvious to me: the men who are in demand now are those who can offer protection from the wind and rain and heat. Men with practical skills. Carpenters. Masons.

Tran is dirty these days, disheveled, but still lovely. And sexy too. Her legs still maintain the strength and shapeliness that got her to the National Ballet.

Each day we spend hours scavenging for food or pieces of trash we hope will be useful.  The Revolutionary Council has forbidden us from working. Our pedigree is too urban, too educated, for inclusion in the Socialist Republic of Vietnam.

In the evenings we swelter, the sheets so saturated they cling to us like giant leeches. I wake in a panic several times a night, thinking I am being enshrouded and dragged into a fetid swamp.

Sometimes, when I wake from one of these swamp dreams, Tran is not in bed with me. Of course, I’ve had my suspicions that she leaves for someone else’s bed. That would be the final humiliation.

Tonight, I’ve awoken again, my breath stolen by fear. I arch my back and expand my chest to swallow as much air as the humid night permits. I grasp at the sheets on Tran’s side of the bed. She is gone again.

An image of Tran straddling the stonemason down the street enters my mind and will not leave. She still has a ballerina’s body: hard, sinewy. She glistens in the moonlight and smiles down at her lover.  I let out a small groan and cannot decide if it signifies a voyeur’s pleasure or a cuckold’s anguish.

Then, another image fills the screen of my mind. Tran is in the alley behind our shack. She stands on a small packing crate, under an enormous, silver moon. Her arms extend gracefully to the heavens as she slowly spins. Then she leaps from one side of the alley to the other, like a jungle cat.  She floats and swirls. I can see she is crying, her tears turned to tiny drops of mercury by the moonlight.

I cannot turn away from all this beauty. I will not risk losing it.

But then Tran is here, sliding back into bed with me.

Her back to me, I can barely make out her muffled reply.